He may not be able to attend in person, but Pope Francis’ image was very much in evidence as world leaders gathered for the COP26 conference on climate change in Glasgow. 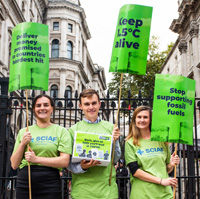 Just days before the opening of COP26, the Scottish Catholic International Aid Fund’s COP26 petition was delivered to the Prime Minister.
Read more…

On pilgrimage … to Glasgow 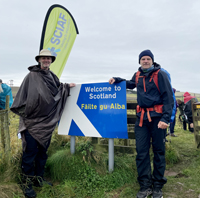 After more than 1,800 kilometres for some, a group of pilgrims walking to Glasgow for COP26 have arrived at the global climate summit.
Read more… 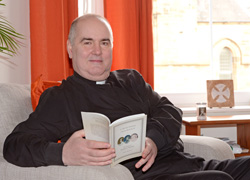 If a person was ever represented by his name it was Monsignor Peter Smith. Archbishop Conti summed it up as he recalled the day of a child’s baptism when the priest asks the parents, “What name do you give to this child?”
Read more… 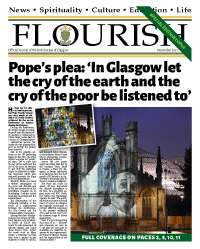 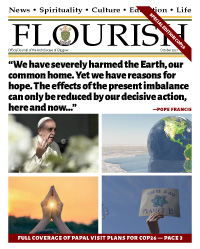 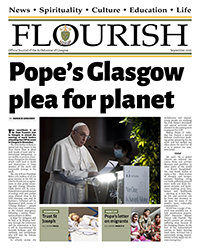 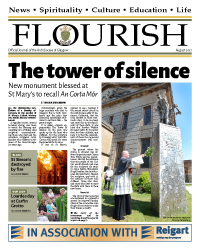 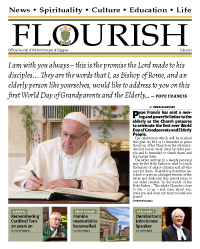 He may not be able to attend in person, but Pope Francis’ image was very much in evidence as world leaders gathered for the COP26 conference on climate change in Glasgow.

During the conference the Pope’s image is being beamed onto the façade of St Andrew’s Cathedral in Clyde Street, as the first of a series of ‘Changemakers’ – individuals around the world who are playing their part in saving the planet from disaster.

And in his Angelus address as the UN gathering began at the SEC, the Pope issued a simple but powerful plea: “Let us pray that the cry of the earth and the cry of the poor be listened to and that this gathering might be effective in offering responses which give concrete grounds for hope to future generations.”

The Holy Father has been a tireless campaigner on the issue and devoted one of the key documents of his pontificate (Laudato Si) to developing Catholic social teaching on ecology and the environment.

The illumination of the Cathedral initiative is the result of a collaboration between the Archdiocese, the City Council and the Changemakers Campaign.

Among the other ‘changemakers’ are dozens of ‘ordinary’ figures such as Eleanor Porter of SCIAF who works to raise awareness of climate change, and many ‘local heroes’ from round the world such as Mara Scollo, a volunteer in Italy who runs a project to get children to cycle to school, and Kenneth Adjeh Yeboah, a cocoa farmer from Ghana who is pioneering sustainable farming methods.

Across the city prayer vigils are being held led by the brothers from Taizé in France, a Mass for delegates is being celebrated in St Aloysius, and the ‘host parish’ of St Patrick’s in Anderston is throwing open its doors to welcome delegates.

The Pope has made no secret of how important the climate emergency is for him. In a powerful appeal made via BBC Radio just before the Conference opened, he said: “The political decision makers who will meet at COP26 in Glasgow are urgently summoned to provide effective responses to the present ecological crisis and in this way to offer concrete hope to future generations.

“And it is worth repeating that each of us – whoever and wherever we may be – can play our own part in changing our collective response to the unprecedented threat of climate change and the degradation of our common home.”

Just days before the opening of COP26, the Scottish Catholic International Aid Fund’s COP26 petition was delivered to the Prime Minister.

Over 4,000 people supported the charity’s call on climate action ahead of the crucial conference.

SCIAF launched its COP26 campaign earlier this summer, which saw a costumed “Boris Johnson” race against time in front of the SEC, which is playing host to the event.

Young SCIAF supporter Olivia McKibbin helped launch the petition in August and is one of the 4,080 signatories.

Pay to protect the poorest communities on climate change: Make sure financial support is given to those impacted by climate change so they can adapt and recover.

Geraldine Hill, Advocacy Manager at SCIAF said: “The voices of over 4,000 Scots have been delivered to the Prime Minister, joining in a chorus of tens of thousands calling for action from around the UK.

“The poorest communities in the world have been hit hardest by the climate emergency. SCIAF’s supporters have made their voices heard and expectations are now on Boris Johnson and world leaders to take action in Glasgow.

“We’re calling for communities to be given financial support to adapt and recover from climate change, for those on the frontline of the climate emergency to be listened to, and for global warming to be stopped in its tracks.”

Olivia McKibbin, SCIAF supporter, said: “If our leaders don’t take urgent action on climate change then nothing else matters. The things that our governments deem important now will be worthless when we cannot breathe the air that’s around us.”

On pilgrimage … to Glasgow

After more than 1,800 kilometres for some, a group of pilgrims walking to Glasgow for COP26 have arrived at the global climate summit.

The group of 30 people have brought their energy and tired feet into Scotland, with some having walked as far as Sweden, Poland and Germany.

The Ecumenical Pilgrimage for Climate Justice joins people of Christian faith with a common goal of holding those in power to account, and inspiring them to take action at COP26.

The Scottish Catholic International Aid Fund (SCIAF) is assisting the pilgrims on the final leg of the journey in Scotland, by helping arrange accommodation and food, with the support of local communities.

Gustav Fredriksson quit his job to join the pilgrimage and has walked over 1,800 kilometres since July 19 from Sweden. He said: “I’ve been thinking more about what I can practically do and when you walk, you have more time to think. I thought, how could I have been so ignorant.

“I’ve become a vegetarian while on this journey and I’ve thought more about flying less within Europe, consuming less generally and living a simple lifestyle. We all need to think about changing our lifestyles.

“It’s great to be in Scotland, the people are nice and friendly here, and there is so much beauty. The first day in Scotland was the best day so far of our journey.”

Nikki Neesam, Community Engagement Officer, SCIAF, said: “We wanted to make sure we gave the pilgrims a Scottish welcome and help spread their message here. With the help of our supporters and local parishes across Scotland, we’ve been able to support the pilgrims with their stay on the way to Glasgow.”

If a person was ever represented by his name it was Monsignor Peter Smith. Archbishop Conti summed it up as he recalled the day of a child’s baptism when the priest asks the parents, “What name do you give to this child?”

In the Archbishop’s words, the name Peter “was an inspired choice” for a man whose faith, strength, loyalty and reliability could be summed up by that word … Peter – Petrus – Rock.

The death of Mgr Peter Smith brought expressions of sympathy from across the Archdiocese and beyond. He was a hugely familiar figure, at the side of two archbishops for over 20 years as Master of Ceremonies at countless confirmations, anniversaries, ordinations and parish visits. His own priesthood spanned the Archdiocese from north (St Augustine’s) to south (St Gabriel’s), form east (St Mary’s) to west (St Paul’s).

He served the Church further afield too, with a period of attachment to the Vatican’s Nunciature to the UN in New York, a city Mgr Peter loved.

His face was familiar to all, yet few really knew the behind-the-scenes work he carried out for so many groups and causes, ranging from young people in secure accommodation as Chairman of the Cora Foundation, to couples seeking annulments through his work for the Marriage Tribunal.

Along the way he organised a Papal Mass, a Cardinal’s funeral, an Archbishop’s enthronement, royal visits … and all the while remained a devoted parish priest who loved his people and was loved by them in return.

It fell to the Archdiocesan Administrator, Mgr Hugh Bradley to deliver the homily at the Requiem at a packed St Paul’s church in Whiteinch, a church which was Mgr Peter’s first appointment as a deacon back in 1983 and his last as Parish Priest until his death. It was, said Mgr Hugh, his pride and joy. “How proud he was of this church and he loved to beautify it,” said the Diocesan Administrator.

He recalled the late chancellor’s legendary love of Christmas and spoke of a trip with his nephew and nieces to Lapland to see Santa Claus. Was it for their benefit or his? Everyone who knew Mgr Peter smiled. Indeed one of his last posts on Facebook was entitled ‘Your Christmas countdown’.

Mgr Hugh recalled Mgr Peter’s legendary appreciation of food – especially in large quantities – and spoke of the happy times at St Mary’s Calton, where, with his friend and ultimately successor as Archdiocesan Chancellor, Canon Tom White, they would outdo each other in culinary extravagances and hospitality.

Mgr Hugh recalled too, Mgr Peter’s total devotion to God, to the Church and to his people. He revealed how he had chosen to go and give evidence himself at the Scottish Child Abuse Inquiry on behalf of the Bishops’ Conference, despite the fatigue and stress of the experience on a man already terminally ill with cancer.

He spoke of Mgr Peter’s great compassion, shown to so many people over the years, those who had suffered misfortune, illness or bereavement or those in need in any way.

“If he could ask anything of you today it would be your prayers,” said Mgr Hugh.

“He died fully expecting to share in the resurrection of the Lord he served so faithfully, and we should be quietly confident that he heard these words as he passed into eternity … ‘well done good and faithful servant.’”

It was fitting that the final blessing and commendation should fall to Archbishop Conti, whom he served as chancellor, MC, support and friend throughout the Archbishop’s time in office.

Archbishop Mario said: “The solidity of his advice, his kindness which could always be relied upon, his sense of fun, his tireless work … I was privileged to have his constant support during my time as Archbishop.”

And in a poignant final memory he said: “That name … Peter. So very appropriate to his personality… I was at his bedside in his final hours to say those lovely prayers for the dying when we ask Our Lord to take the person to Himself. He was in deep peace. And the thought of St Peter came back to me.

“Mgr Peter was lying in the hospice bed, his right arm stretched out, and it reminded me of that scene in the Gospel when St Peter, having set out to walk across the waves to reach the Lord, at the last moment stretches out his hand to catch that of Jesus who welcomes him safely into the boat.

“I am sure that is what happened too in this case.”