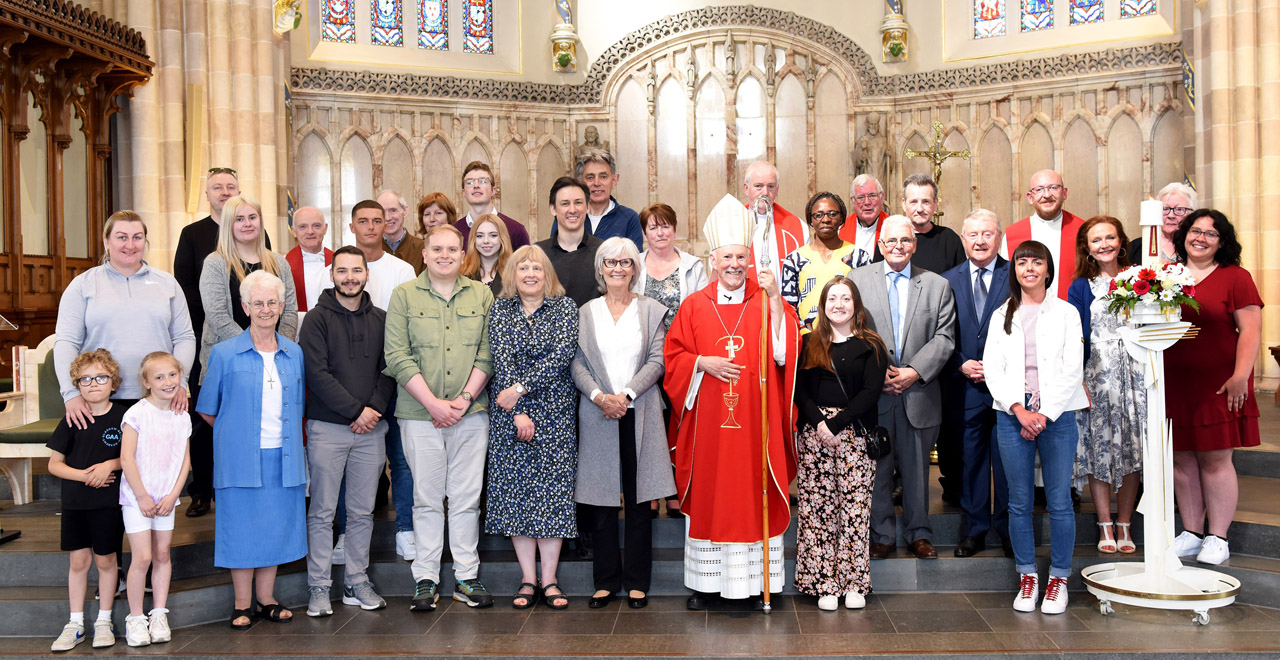 Archbishop: God will never abandon us

Glasgow’s ‘new Catholics’ were welcomed to the Cathedral on Pentecost Sunday by Archbishop Nolan. 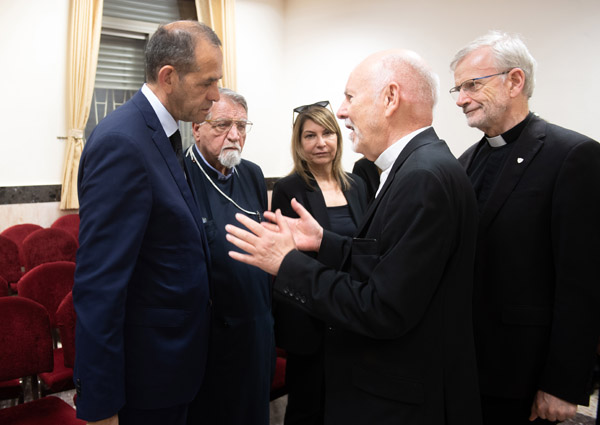 Archbishop Nolan has spoken out against injustices and violence in the Holy Land after a visit to the area.
Read more… 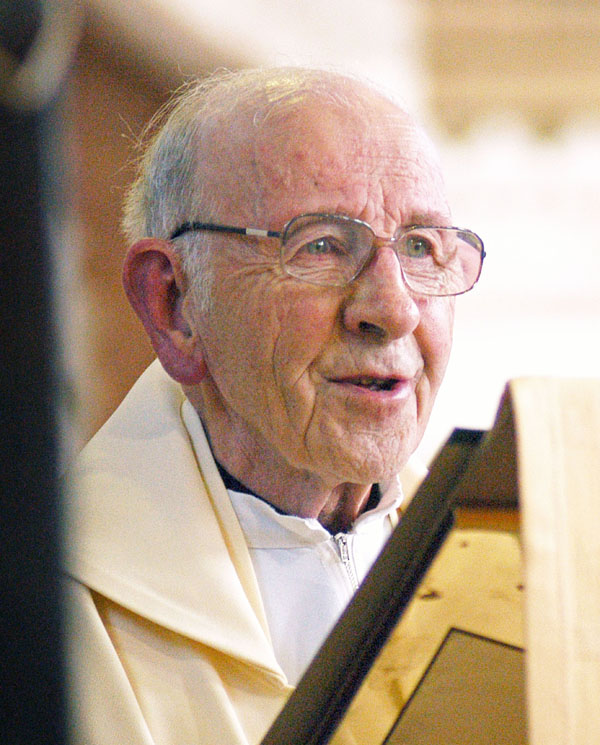 The teachers of wisdom were regarded as men of God. The primary purpose of the sacred author was to help the people in a time when they had experienced suffering and pain. The author was the “mouthpiece of God.”
Read more…

Synod report to be presented at Corpus Christi Vespers 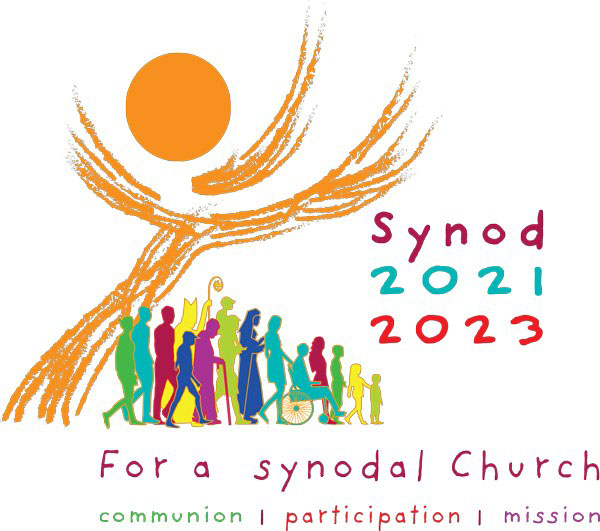 The findings of countless discussion and listening sessions in preparation for the Synod of Bishops called by Pope Francis on the future of the Church will be presented later this month to Archbishop Nolan.
Read more… 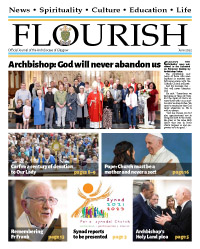 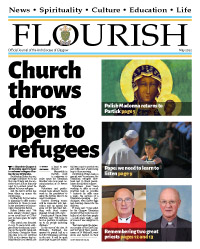 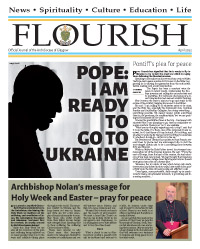 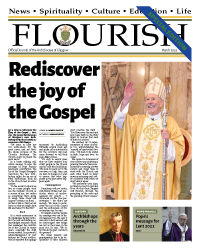 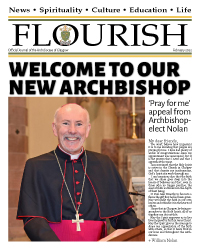 Archbishop: God will never abandon us

Glasgow’s ‘new Catholics’ were welcomed to the Cathedral on Pentecost Sunday by Archbishop Nolan.

The Archbishop met many of those who were baptised or received into full communion with the Catholic Church at Easter.

And his message was … God will never abandon you!

He said: “Sometimes we feel alone at times of crisis. But the Spirit of God is always there with us no matter what we have to face. We need to remember that God never abandons us. He is with us always.

“God has chosen you but also commissioned you to bring His love to the world. He gives us the same Holy Spirit that was in Jesus which inspires us and empowers us to do good.”

Archbishop Nolan has spoken out against injustices and violence in the Holy Land after a visit to the area.

The Archbishop was part of a delegation of European bishops who met local people, religious and political leaders during their week-long mission.

At the conclusion of their visit, they issued a statement which expressed their powerful support for the family of a young female journalist who was shot last month.

Videos obtained by CNN, corroborated by testimony from eyewitnesses, and a weapons expert, suggest that Shirleen Abu Akleh was shot dead in a targeted attack by Israeli forces.

The Archbishop and his bishop colleagues visited the journalist’s closest relatives to express their condolences and solidarity. Later they issued a statement saying, “We experienced the deep sorrow and anger felt by local Christians at the killing of Palestinian Catholic journalist Shireen Abu Akleh and the shameful attack on mourners at her funeral.

They added: “Many of those we encountered are facing violence and intimidation by settler groups, restrictions on their freedom of movement, or separation from their families because of the status they are assigned.

“We share the concerns expressed by the Christian community about unilateral restrictions on freedom of worship during Easter, imposed by the Israeli police.

“We witnessed how many people of all backgrounds are living in poverty, which has been compounded by the pandemic. The absence of pilgrims during the past two years has devastated livelihoods, including among Jerusalem’s Christian community, leaving some families struggling to afford housing, food, or other essentials”.

They also called for Jerusalem to remain an open city welcoming all faiths.

They said: “Jerusalem is a Jewish city, a Christian city, a Muslim city. It must remain a common patrimony and never become the exclusive monopoly of any one religion.

“We came to meet and pray with our sisters and brothers, mindful of Patriarch Pizzaballa’s message that it is our right and duty as Christians to uphold the city’s openness and universality.

“The Christian community is essential to Jerusalem’s identify, both now and for the future. Yet its continued presence is threatened by occupation and injustice.

“Amid these challenges, there are nevertheless signs of hope. We visited Christian organisations taking responsibility for the wellbeing of their community and wider society. They are working tirelessly to alleviate hardship and improve lives.

“We met young people who, despite facing daily violations of their fundamental human rights, refuse to be the last generation of Christians in the city.

“Pope Francis affirms the universal value of Jerusalem, which goes beyond any consideration of territorial issues.

“Inspired by Christ our Peace, all Christians must help preserve the city’s sacred character and promote an authentic vision for Jerusalem as a place of dialogue and unity”.

The teachers of wisdom were regarded as men of God. The primary purpose of the sacred author was to help the people in a time when they had experienced suffering and pain. The author was the “mouthpiece of God.”

The first reading of Fr Frank’s funeral Mass was familiar to many: “The souls of the virtuous are in the hands of God, no torment shall ever touch them. In the eyes of the unwise, they did appear to die, their going looked like a disaster, their leaving us, like annihilation; but they are in peace. If they experienced punishment as men see it, their hope was rich with immortality; slight was their affliction, great will their blessings be”.

“But they are at peace…”

I could have finished the homily here. That reading from the Book of Wisdom sums up Fr Frank’s life.

In the second reading chosen for his Requiem we read the words of St Paul to the Romans: “The life and death of each of us has its influence on others.”

If we were ever in any doubt about the life and death of someone leaving a lasting influence, we needed only to look around us at the gathering of people who filled St Michael’s for Fr Frank’s funeral.

Fr Frank’s life – and his death – influenced all of us in all the seasons of life, from the young men with whom he played football many years ago to the Tuesday “Cup of tea and roll and sausage” group who gathered in the hall in his final years.

We need each other as a community as we come together to give him back to the God who gave him to us.

The Gospel of Fr Frank’s funeral came from the Beatitudes.

The best commentary on the Beatitudes is the example of the life of Jesus. He is gentle and kind. He mourned, he experienced hunger and thirsted for what is right. That is what Fr Frank did for 67 years.

Fr Frank mirrored these qualities in a life dedicated to God in this Archdiocese and, in a particular way, to the people of St. Michael’s.

I was reflecting over the past couple of days on the Gospel where Jesus asked Peter: “Do you love me?” Fr Frank, like Peter, could say: “Lord, you know I love you.” Jesus continued: “Feed my sheep.”

It was back in 1948 that Fr Frank heard the call to follow the Good Shepherd and entered seminary in London to study for the Priesthood. At his ordination in 1955, he would have said: Adsum – Present – that is all the Church asked of him, and ‘present’ he was for almost 68 years.

We all have our favourite memories of Fr Frank.

When I first arrived at St. Michael’s and was having dinner with him, he reminded me that he was a plain eater (mince and potatoes, stew, etc.). He said to me: “I don’t like any of that foreign food you would eat – things like pasta. As a matter of fact, I can’t stand pasta.”

He had a great sense of humour … We have an ‘Alexa’ in the kitchen and Fr Frank was fascinated by the fact that Alexa would talk back to us, answer questions and play requests. He said to me: “How does she know the songs to play?”

I replied: “Talk to her, tell her who you like.” He said: “John McCormack.” He sang along with John McCormack – we all know what a good singing voice Fr Frank had. Suddenly he stopped, mid song and said: “I have lost my singing voice – how old were you when you lost yours?”

One day, while having lunch in the Euro Café in Duke Street, Fr Frank was filling me in on the doctor’s instruction that he must never go anywhere now without his walking stick. He had been told to use it everywhere – in the Church, in the house, while outside. I asked him where it was today. He replied: “In the house!”

During the first year of lockdown, we drove through the city every evening – from the East End to the West End – along Great Western Road and back home. A journey to break the long days of being indoors. After a few weeks, Fr Frank asked me: “Is this the only road you know?”

Our next foray, therefore, was down the coast to Greenock, two bowls on the back seat for ice cream on the Promenade. Noticing the ferry for Dunoon, we decided to make that another journey and, hoping that we were not breaking too many lockdown rules, we had lunch in Dunoon.

After the Chrism Mass on Holy Thursday this year, I went to the hospital to anoint him with the “new oils.” He believed in the resurrection. He died, peacefully, on the Sunday dedicated to Divine Mercy – a fitting day to go home to God.

May he rest in peace.

Synod report to be presented at Corpus Christi Vespers

The findings of countless discussion and listening sessions in preparation for the Synod of Bishops called by Pope Francis on the future of the Church will be presented later this month to Archbishop Nolan.

Currently deaneries are summarising the parish responses and the nine deaneries plus primary and secondary school responses, along with submissions sent privately, will be synthesised on June 11 by a team of representatives from each deanery.

The aim is to come up with a diocesan submission which represents the views of those who took part in the synod process.

The completed synthesis will be presented to the Archbishop in St Andrew’s Cathedral on the Feast of Corpus Christi during sung evening prayer at 7pm on Sunday 19th June.

“The synod experience has been very positive and allowed us to put into practice Pope Francis’ invitation to be a listening Church, listening also to views that are not always easy to hear.

“Now that this phase of the process is over, I would want to emphasise that all are welcome to this diocesan celebration on the Feast of Corpus Christi. No-one is excluded. It is open to all and should be a fitting conclusion to this first stage of the process.”

Among the themes which emerged in the listening sessions were:

The need for a more even distribution of power with parishes

The Glasgow submission will form part of a bigger contribution from the Bishops’ Conference of Scotland, which will in turn feed into the Europe-wide findings ahead of the Synod of Bishops in Rome in autumn 2023.